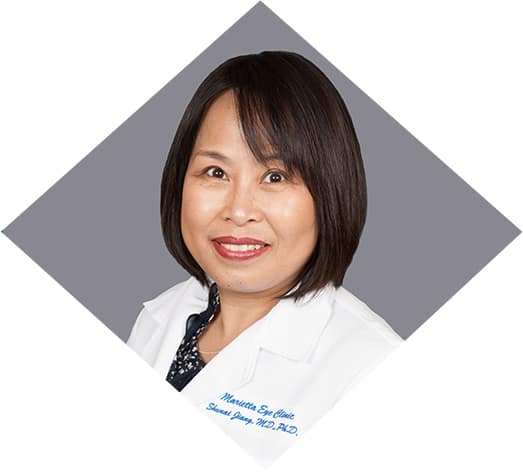 The ophthalmologists and optometrists of Marietta Eye Clinic each chose to join this practice because of a common philosophy, providing the highest quality patient care possible. Marietta Eye doctors are the experts in their fields, the top graduates in their educational and training programs, and deeply compassionate health care providers. The physicians and optometrists here research and provide the latest technology for their patients, listen intently to their patients’ needs, and ensure their patients have the highest quality support and surgical staff available. We invite you to explore the credentials and personality of our doctors on this page. Thank you for considering Marietta Eye Clinic.

If you were to see her running barefoot in the grass chasing after an unruly beagle named Copper, you might underestimate the impressive accomplishments of Dr. Shunai Jiang. And while entrusting your eyes to her skilled hands, you aren’t likely to guess how hard she once labored with those same hands.

Born into a Korean family but raised in China during the Cultural Revolution, the young Dr. Jiang spent her formative years harvesting crops in the open fields and carrying bricks to the masons who ordered her around. But while Mao Zedong intended for the young girl to fall in with China’s classless society, she was listening instead to a more trusted advisor: her father.

“You should have big dreams,” he told her. “You can do anything if you apply yourself.” It was her father who encouraged her to break from tradition and become the person she wanted to be.

“I always enjoyed my father’s support,” she says. “He didn’t want me to limit my options; he wanted me to purse whatever I wanted to do.”

Finally able to attend classes that offered a traditional education at the age of 13, Dr. Jiang plunged into her studies and exceeded everyone’s expectations. After completing only 3 years of formal education, she applied and was accepted into medical school. She emerged as a physician at the age of 21.

Knowing that cataracts were one of the leading causes of blindness in China, Dr. Jiang wanted to continue her medical education and specialize in ophthalmology.

“I always marveled when I heard stories of people having their vision restored after cataract surgery,” she says. But without the necessary connections that made it possible to enter the most respected field of medicine in China, she was unable to pursue that dream.

Instead, she obtained a master’s degree in immunology and practiced in Beijing for 2 years before deciding to go abroad in pursuit of a Ph.D. in immunotoxicology. She attended the Karolinska Institute, one of world’s most prestigious universities for medical training and research and home of the Nobel Prize in Physiology or Medicine. Five years later, she received a hard-earned Ph.D.

Not yet satisfied with her medical knowledge, Dr. Jiang made her way to the U.S. so she could research age-related eye diseases at Emory University.

“I soon realized that in America opportunities are available to anyone willing to work hard, and I was accustomed to working hard,” she says. “I thought to myself, here I can become an ophthalmologist!” And still, her father was there for her. Dr. Jiang’s parents moved to the U.S. for 4 years to help raise their young grandson while Dr. Jiang studied ophthalmology.

Striving to spend as much time with her son as she could, Dr. Jiang learned to combine work and play. More than once, she brought home a pig’s eye to teach her son how to dissect and identify the structures of the eye, or carried him with her to watch when she was on call at the emergency room.

After following a long career path around the globe, Dr. Jiang is finally in practice as a board-certified ophthalmologist, specializing in cataract and glaucoma surgery.

“As an ophthalmologist, I get to see every day the difference I can make in other people’s lives,” she says. “I love ophthalmology; when I look inside the eye, I see something beautiful.”

Fluent in English, Korean, and Chinese.

Dr. Jiang enjoys spending time with her son and their beagle, Copper.

"Dr. Jiang is an excellent surgeon, and I appreciate all that she did for me."
-Alice F.
"If the second cataract surgery addressing the right eye is equally as successful as the left eye, I will be beyond thrilled with the results of Dr. Jiang’s work! She, along with the surgery center staff, couldn’t have been more accommodating."
-Daniel D.
"Excellent pre-op explanations from doctor and scheduling information from Gloria, follow-up preparation information from nurses. On the day of surgery: excellent reception and care during the surgical procedure. Most appreciative of follow-up phone calls from Dr. Jiang."
-Erma J.
"Everyone was very attentive and made me feel very comfortable before and during the procedure. … Top credit to Dr. Jiang and the anesthetist for helping me to relax."
-Donald K.
"I had cataract surgery in June/July that also corrected two other eye issues: narrow angles and astigmatism. Dr. Jiang was the surgeon. She was great, and I am now enjoying 20/20 vision with no reading glasses required."
-Claire N.
"Dr. Jiang is fabulous. Very thorough."
-William A.
"I have always been well treated and the service I receive at Marietta Eye Clinic is excellent. I feel very fortunate to be under the care of Dr. Jiang."
-William L.

What is the Femtosecond Laser? by Shunai Jiang, M.D., Ph.D. 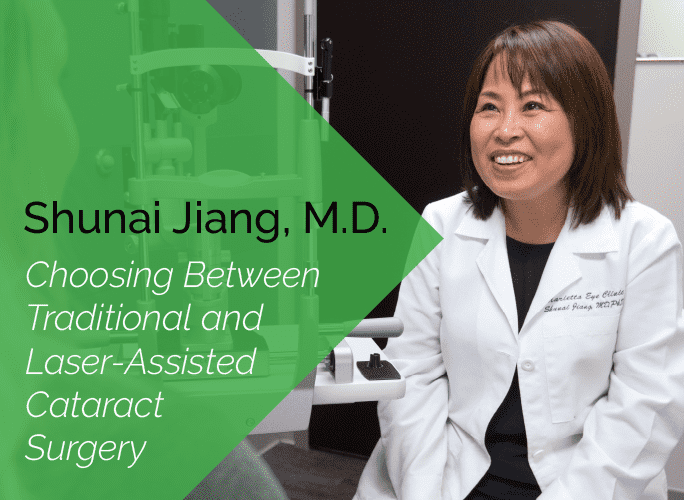 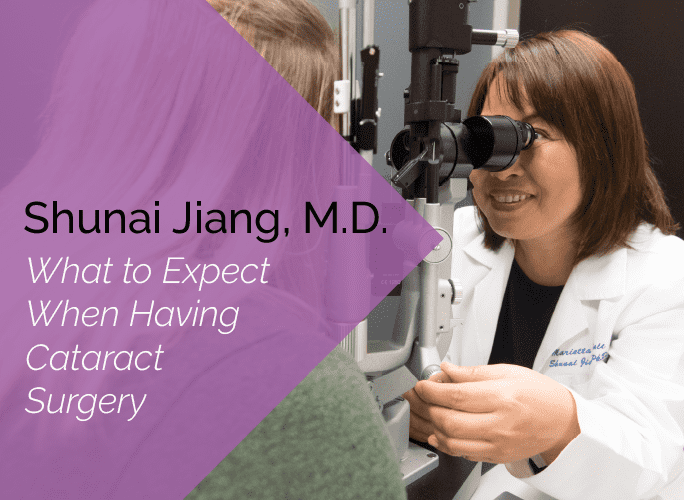 What to Expect When Having Cataract Surgery by Shunai Jiang, M.D., Ph.D. 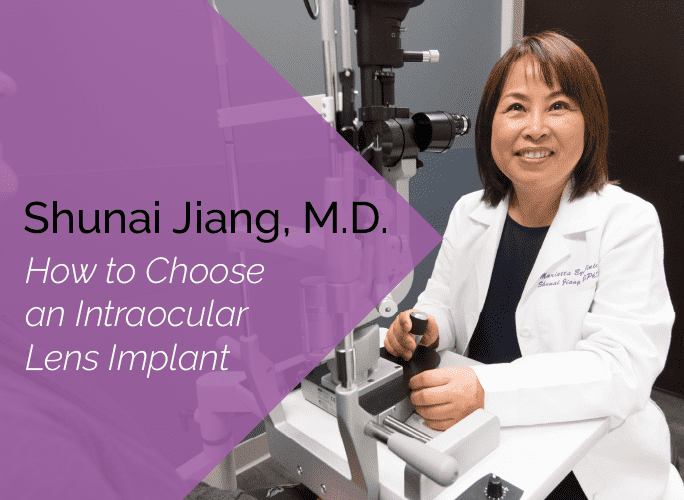 How to Choose an Intraocular Lens Implant by Shunai Jiang, M.D., Ph.D. 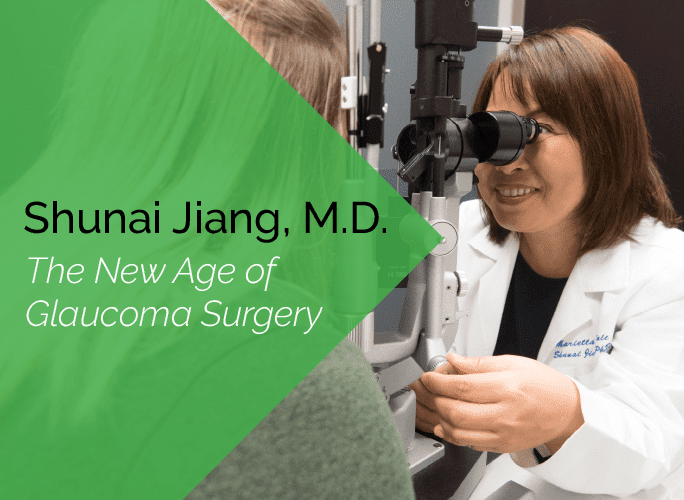 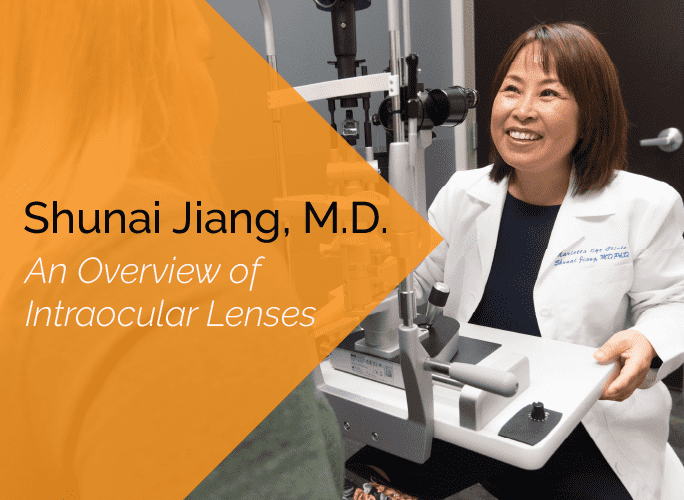 An Overview of Intraocular Lenses by Shunai Jiang, M.D., Ph.D. 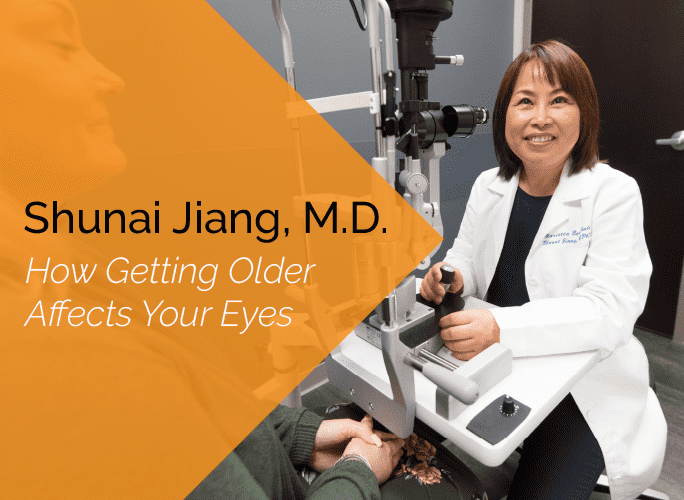 Cataracts: How Getting Older Affects Your Eyes by Shunai Jiang, M.D., Ph.D.