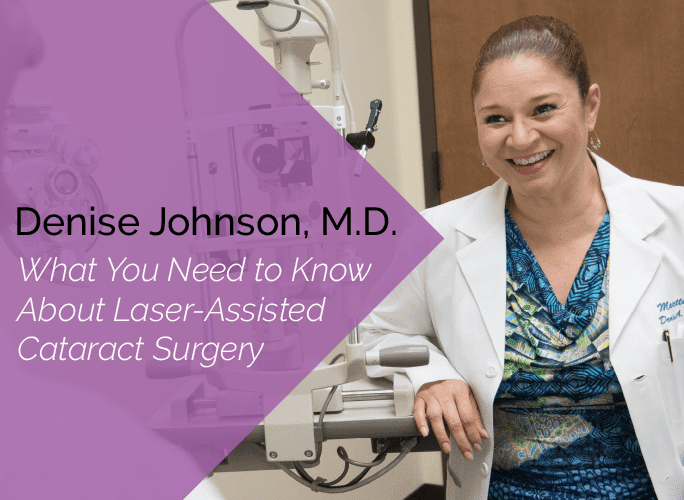 Cataracts occur when the lens in your eye becomes clouded. Around age 40, proteins in the eye start to break down. By age 60, most people begin to experience clouding of the lenses, although symptoms may not be noticeable for years. If cataracts become so bad that they limit a patient’s day to day life, an ophthalmologist may recommend cataract surgery, a procedure in which an eye surgeon removes the cloudy lens and replaces it with an artificial intraocular lens (IOL). Thanks to modern technology and the femtosecond laser, cataract surgery is safer and more effective than ever. Marietta Eye Clinic has a team of cataract specialists highly skilled at performing eye surgery with the femtosecond laser.

What is the Femtosecond Laser?

A femtosecond laser is an infrared laser that emits bursts of laser energy at an extremely fast rate. Although it was originally introduced in ophthalmology for use in LASIK eye surgery, femtosecond lasers have become widely used in a variety of eye surgeries and have become a preferred tool in many surgical eye procedures.

The femtosecond laser was introduced in the U.S. in the early 1990s and developed by Dr. Kurtz at the University of Michigan. It was approved in 2001 by the U.S. Food and Drug Administration for use in laser-assisted in situ keratomileusis, or LASIK eye surgery. In LASIK, the femtosecond laser is used on the cornea to create a corneal flap. Underneath that flap, the eye can be reshaped, and the flap serves to protect the eye as it heals.

Since then, the technology has dramatically improved. Newer models of femtosecond lasers have an increased pulse frequency. Less energy is released in current femtosecond laser technology so that less tissue surrounding the target area is affected. These models are more energy efficient than previously introduced models and procedures can now be completed more quickly. Today, the femtosecond laser is used in a variety of ophthalmic surgeries and advancements continue to be made.

In laser-assisted surgery, tissue is broken apart at the molecular level rather than cut with a blade. The femtosecond laser disrupts stromal tissue through a process known as photoionization. Targeted tissue is vaporized, creating a split where a cut would normally be made.

A femtosecond laser has been proven in studies to offer more precise incisions with less damage to the surrounding tissue compared to those made with a blade. A femtosecond laser also has the benefit of greater consistency and more versatility. Compared to an Yttrium-Aluminum Garnet (YAG) laser, another laser commonly used in eye surgery, a femtosecond laser causes less collateral damage — 106 times less damage, in fact. The unique properties of femtosecond lasers have led to many advances in surgical techniques as they have become more widely adopted.

Which Procedures Benefit from the Femtosecond Laser?

Other common uses for femtosecond lasers include:

Cataract becomes extremely common with age. By age 80, cataract is present in 100% of the population. For this reason, cataract surgery is one of the most common surgeries performed in the U.S. and many other developed countries.

Dr. Johnson is an ophthalmologist at the Marietta Eye Clinic who offers comprehensive care and specializes in cataracts, dry eye, and cosmetic treatments. She serves the Acworth and Towne Lake locations. She is board-certified by both the American Board of Ophthalmology and the American College of Lifestyle Medicine. She received her undergraduate degree from Cornell University and her medical degree from the Temple University School of Medicine. She is professionally associated with the American Academy of Ophthalmology, the American Society of Cataracts and Refractive Surgeons, the American College of Lifestyle Medicine, and the Physician’s Committee for Responsible Medicine. Read her full bio here.

The American Optometric Association (AOA) describes itself as the leading authority on quality care and an advocate for our nation’s health, representing more than 44,000 doctors of optometry (O.D.), optometric professionals, and optometry students.